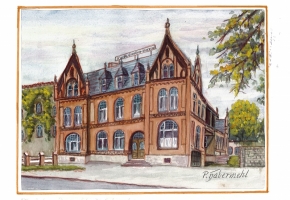 The history of KOLPINGHAUS Fulda

1855 the story of KOLPINGHAUS Fulda begins. This is the year Josef Modest founded the first Journeymen Association in Fulda. Adolph Kolping would have liked to attend the founding ceremony but was not able to be present. The first meetings took place in the "Roten Löwen" on Severiberg.

1865 the acquisition of Haus Angeli at the Gemüsemarkt in the Kanalstraße represented the first owned building according to the inspiring Cologne model. This house was used from then on as a place to meet, educate and accomodate migrating journeymen. Soon this house became too small.
1888 the Catholic Journeymen's Society of Fulda acquired "Harmonie" the Catholic clubhouse garden with a size of 2700 square meters.  This house served as a temporary accomodation for 3 years after the sale of Haus Angeli.

1883 the Schüssler´sche Eckhaus, a corner house in the Petersgasse (T&N) was purchased. Alongside the caretaker's apartment were economic rooms, a pool table, the hall, a boardroom and hostel rooms for journeymen. Numerous events took place here, thus showing the significance the Journeymen's Association must have had for the city of Fulda in those days.

1901 the Schüssler´sche Eckhaus was sold and in exchange the Dr. Kind´sche Haus in the Florengasse, which stood opposite the own property, was purchased. Now plans could be pursued for constructing a new 1902-03 building with the approval and support of the Episcopalian authority. On 16 August 1903 the new KOLPINGHAUS in the Florengasse 17 street was inaugurated by deacon Müller and handed over to its designatedpurpose.
The large hall holds 600 people. For decades the house was a prominent and popular meeting place for many Fulda citizens. A place where not only the journeymen felt at home in the theater, music and singing sector, but also the general public at festivals and celebrations.

1940 the Kolping families of the Diocese of Fulda were abolished under the pressure of the National Socialists, but on May 12, 1946, the Bonifatius monument carried the inscription "We're back!"  The established Kolpinghaus structure finally had to give way because of the widening of the street B458 in the Dalbergstraße area.

End of 1969 the new Kolpinghaus was completed and inaugurated according to the plans of master builder of the diocese Rudolf Schick on Goethestraße 13. Work focused on managing a youth hostel with room for 54, an education center and an economics area with restaurant and hotel accommodation. In 1972/73 an extension for the hotel business was built.
A special time in the history of the new Kolpinghaus was the admission of 12 unaccompanied Lebanese youths in 1988.

Since 1982 floors 1-4, and since 2000 all 6 floors of the main building are being used as accommodation for the hotel. The youth hostel had to be closed down. With the Prälat room, a dining room was created to meet refined cuisine wishes of guests and for family celebrations.
The Kolpinghaus Fulda was renamed Parkhotel Kolpinghaus Fulda in 2002 and has primarily retained an economic focus on the conference business ever since. Nevertheless, the company's philosophy of an experiencable KOLPING spirit remains intact: in every hotel room and meeting room, guests will find an aphorism from Adolph KOLPING.  Upon successful renovation of all 3 buildings, the meeting rooms, the hall and the restaurant areas, the establishment enjoys a growing popularity since 2010 among numerous associations and companies and the population of Fulda, especially during the 11 carnival events. The ParkHotel Fulda is one of the largest hotels in Fulda and passes the spirit of Adolph Kolping on to its guests.

Your hotel in the heart of Germany
Awards and Reviews

ParkHotel Fulda the way you find us!
The central location and easy access by car or by train makes Fulda and the Parkhotel a popular meeting point and seminar venue. There is also a car park for those arriving by car.
» Click here for the map
ParkHotel Fulda three star hotel and convention center with christian traditions.